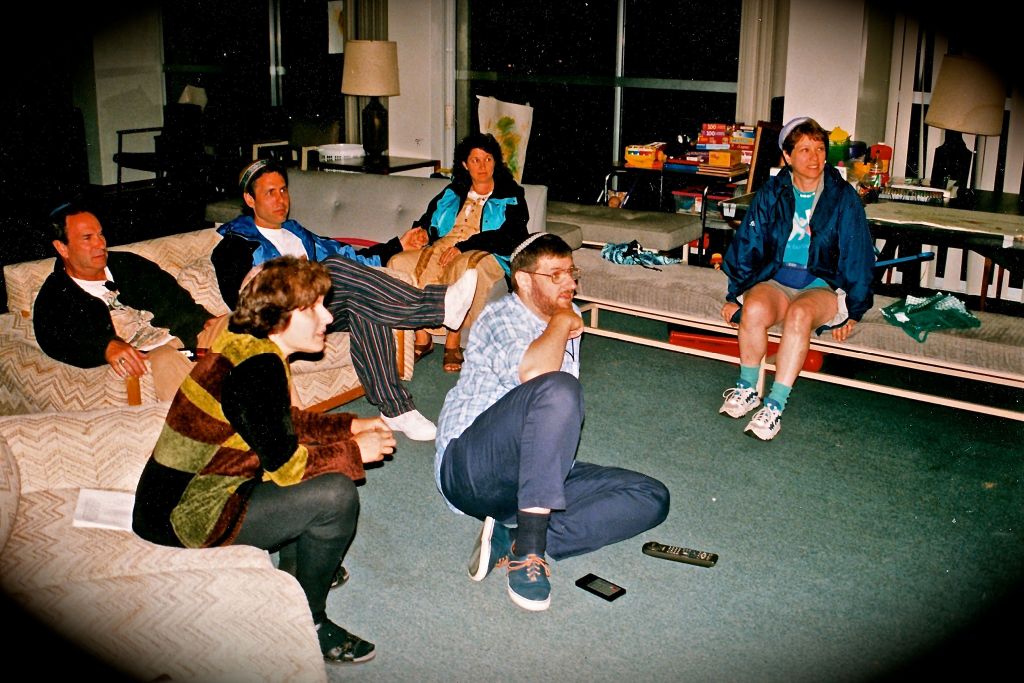 God selected a very holy escort for the souls of the Israelis murdered in Bulgaria, on the very anniversary of the deportation to Auschwitz of 13,000 Parisian Jews. You see, our colleague, Rabbi Michael Goldberger succumbed to renal cancer on that day last week. I’d like you to know of him, at least through this article, if you don’t already. For he was remarkable and much beloved by his family, friends, colleague, community and students. He looked up to Reb Zalman, as one would a good and true father, teacher and mentor. Reb Zalman’s ideas deeply, a dog-eared Integral Halachah sat beside his telephone on the day we last visited. In the attached photo from an ALEPH Kallah, you will see him offering a film of the Torah dedication he organized against significant odds in Dusseldorf, Germany where he served before serving in Zurich.  f 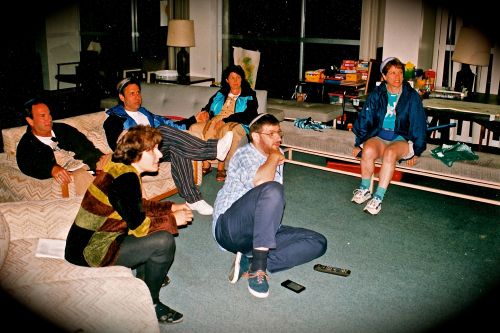 A Consumate Colleague to Colleagues

Perhaps twenty years ago an e-mail arrived inviting us to a Shabbat overnight at the home of the chief orthodox rabbi of Dusseldorf, Germany. Strangely, it seemed personalized. Why would such a figure write to us?? It would turn out that Rabbi Goldberger was facing a massive influx of Russian immigrants to his town and was wondering how to help them live meaningful as Jews in Germany. He’d heard of work I was helping with through Project Kesher in the Ukraine and wanted a consult. Well, that was his starting question, upon arrival we discovered he was deeply immersed in the spiritual revitalization of Judaism, within Orthodoxy, within Germany and very connected to Reb Zalman. But Rabbi Goldberger had a problem that weekend…and perhaps you saw the film he brought to the ALEPH Kallah one year about how he evolved that problem into an amazing opportunity.

The problem was that a Torah had been found buried in the ground, from during WWII, and was too damaged to be repaired. He wanted to honor the life and perishing of that Torah and its community by having a new Torah written and dedicated within Germany. He canvassed every Jew and obtained a small donation towards each and every letter. Created beautiful “letter donor” certificates and planned a magnificent ritual that would be broadcast for Crystal Nacht on German national television. The keynote speaker would be the Chief Ashkenazi Orthodox Rabbi of Israel. But…

In the weeks leading up to the Torah dedication, the Chief Rabbi faxed a cancellation note. He found himself unwilling to dedicate a Torah in Germany, instead he would be speaking at a Crystal Nacht commemoration in another German city. That’s right –the Chief Rabbi chose to focus on the destruction rather than rebirth, rededication and renewal. Rabbi Goldberger, Michael, as we came to know him, was devastated. The role of the Chief Rabbi as a leader of the Jewish future in Israel and beyond was, to him, essential. My husband Barry and I sat down low with him as he grieved the collapse of plans. Eventually, a new concept emerged, Michael decided to contact the head of Germany to be the lead speaker, who accepted and appeared in this role in the international media.

Facing Every Challenge with Creativity and Courage

Another stunning challenge that Rabbi Goldberger faced was trying to open a Jewish day school in Germany. We recently attended a bat mitzvah in Germany, but when Michael wanted to open a day school, it was a virtually inconceivable concept. And, the authorities did not want to grant a permit for the school. Undeterred, he did research and found the papers for a Jewish day school from before the war that had been under the auspices of his community. Then they required a minimum number of students to re-open the school. He tried and tried but couldn’t meet the minimum. They lowered it. Still not enough children, they lowered it again. Finally he told them: “It is not my fault that Germans killed all the children. We must be allowed to re-open with even a handful of families. It is justice to do so.” They allowed the school to be “re-opened.” He created a magnificent school with a Hebrew immersion education option. Or at least this is how we recall things at this time. What courage!

When approached by a family of five wishing to convert to Judaism in Holland where conversion can be virtually unattainable, who better to advise than Rabbi Goldberger? The family had been unable to secure conversion from any source, even though they were actively practicing Judaism–kashrut, shabbat, sukkah, etc. for many years at this point. One of them is an energy worker, who also transduces Kabbalah at a very high level – it seemed absurd, and deeply frustrating. Rabbi Goldberger immediately agreed to help, to join in the mentoring and eventually their giyur occurred, with involvement of this woman rabbi. Whenever he found a viable way, Michael pushed for inclusion and equality. What a blessing!

His smile and laughter will stay with all who knew him. Michael’s ability to see the humor in a situation and so deflect conflict was a powerful learning. During a visit to the congregation he served in Dusseldorf, I was wearing a kippah at services. An elderly woman went up to him in synagogue demanding he call the police because “there is a woman kippah a kippah in here.” His clever answer that quickly diffused her concern– “By all means please show me where this is against the law and I will call the German authorities immediately.” She hooted in awareness at his response and, even so, sat vigilantly with me during services asking questions about the meaning of prayers. She became a friend and advocate for inclusion through his adept approach.

Michael Goldberger was very attuned to HaShem; to how magnificently, and poignantly inter-connected All Is. He recalled to us a time when a man came up to tell him that during the war he had to shoot a Russian soldier in self defense. As the man he’d shot fell, the man heard the falling soldier uttering the Shema. His sermons will be coming out in a book this fall, hopefully also in English translation. He captured remarkable story moments for teaching, with his emphasis upon humanitarian points to pursue and promote within Jewish text and tradition.

Michael also sang as though already an angel and several CDs of his have been produced. Among them is one with his dear friend, a hazzan, Marcel, who shortly preceded Michael in death with the same illness. Michael then made a CD in Marcel’s memory. We treasure these works and will ask the family for copies for Ohalah and Kallah. The melodies and magnificent voices carry the spirit of simchah, Shabbatand chagim in a way that textures time with the sweet fullness of spirit.

The Move to Zurich

Rabbi Goldberger moved to Zurich to be closer to family and received another significant rabbinic appointment and day school to head. He and Pnina manifested loving care and parenting according to the needs and ability of each child, in the way to which we all likely aspire. We again visited Michael in Zurich just before the High Holidays this year, when his renal cancer was already unstoppable. He was passionately was working the two jobs while turning out creative psak halachah such as finding a way to allow women to attend cemetery funerals (not allowed in some European Orthodox settings).

Rabbi Michael Goldberger became my mashpia, until he fell too ill, and he was very much a role model for the integration of tradition and change for my Hubbatzin Barry and I. He looked to the positive in each person, the mitzvah of hakarat hatov ever on his lips. When I would ask after the welfare of Jewish Renewal folks in Europe, he would give an update rich in joy at the accomplishments of each and every one within his acquaintance or mentorship.

I wish you had all known him– a rabbi, scholar, innovator and mensch of the highest order, Rabbi Michael Goldberger.