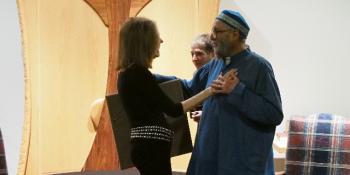 One aspect of ALEPH’S work for the broader community of Jewish renewal has been its ongoing connection with The Shalom Center as an independent body led by one of ALEPH’s co-founders, Rabbi Arthur Waskow. On November 3, The Shalom Center sponsored a celebration of Reb Arthur’s and Gloria Steinem’s 80th birthdays, called “This is What 80 Looks Like: Elders as Activists, Activists as Elders.” It was there that Rabbi David Saperstein, director of the Religious Action Center of Reform Judaism, introducing Reb Arthur, honored his work, that of The Shalom Center, and that of the movement for Jewish renewal as a whole, with these words:

“The Renewal movement has not only grown into a significant presence in its own right, but has had a profound impact on the Reform, Conservative, and Reconstructionist movements.  It is time that this be acknowledged. The merging of aesthetics of new liturgies and rituals, the synergy of mystical prayer and meditation, passion for social justice rolled into an expression of Judaism has brought new light into so many Jewish lives.” (Video and more here.)

ALEPH is planning to partner with Shalom center on a Climate Change over the next year, to help create a Jewish Prophetic Voice on climate change as an ethical issue, work with interfaith organizations addressing the issue, and help our members and communities learn how to improve their own impact on this top environmental and social issue.

Watch this space, and while you at it, adjust that thermostat and turn off some lights!