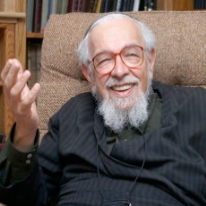 Several times the Bible tells us that God wants to have a Place “to make His Name dwell therein.” It’s interesting  that God does not say ‘I will dwell there,’ but that  ‘My Name will dwell there.’ While everything is God and in God, and the whole cosmos is not separate from  God, the point that a Temple makes is that there is a  concentrated, stronger focus of the quality of Divinity for  those who enter there. So while it is true that God is in  everything, and everything broadcasts its own quality, a Temple could be understood as a kind of “broadcasting  tower” from which a signal goes out to the world.

The carrier wave is a field of blessing, and the message stream is the way in which God would like  to see the world be in harmony in order to receive that blessing. There would also be a certain kind  of beacon in the broadcast, giving meaning to life and beaming the sense of justice and compassion  for the world. In each human being there is a receiver for that broadcast – because Divine  Compassion broadcasts on human wavelengths. People who are open to God and want to be open  to receive that beacon can in this way recalibrate their moral and ethical life.

Although the First and the Second Temples were destroyed, the teaching is that the Third Temple  is already present on a higher and more subtle vibratory scale. The broadcast comes even now  from that Temple, is received by some people and, alas, not by others. The beacon to us, as human  beings, also invites us to contribute to that broadcast. In the way in which we invest energy we  boost the signal strength in public worship and in private prayer, in meditation and then acts of  justice and compassion.

We beam these back to the Source of the broadcast that we call the Name of God. [There are  many more possible models for this process. Usually an organismic model is preferable, but for this  process I find that the technical model of “broadcast” will help me make the point]

There are two modes of looking at reality in Jewish mysticism:

Yichuda ila’ah, the higher union, is when we unify everything in God to the point where the  infinite is the only reality there is. This points to the sentence and its intention: Sh’ma Yisrael — Echad.

Yichuda tata’ah on the other hand is indicated by the sentence that follows: Baruch Shem K’vod  Malchuto l’olam va’ed, May the Name of the Glory of His Kingdom (the reflection of majestic  effulgence) reach us here in our world. Yichuda tata’ah sees the universe as God embodied in  all the details of life from galaxies to humans, and from humans to energy particles, as one  organismic, living, conscious whole.

There is a further teaching which touches the cosmic process of Yom Kippur: each Yom Kippur a  new “Shem” – a “God-Name” is emanated downward to energize the world for the coming year.  Embedded within it is the direction that Divine Providence wants each part of the cosmos to take.  The Name that came down the year before is no longer serviceable for the present year. Kabbalah  describes it as if the energy matrix of the last year has been corrupted (by human beings trespassing  on the Divine intention). [Imagine: the house has a hot-air furnace and every room has filters  through which the heated air passes – and it gets clogged and needs to be replaced]

The great broadcast of Divine Indwelling beams to the human heart, the inner sanctuary that is a  hologram of the cosmic Temple, which is a receiver. It therefore also depends on our attunement to receive the broadcast. I believe that every spiritual discipline is set to attune us to be able to  receive this broadcast with greater fidelity. So in our liturgy we ask: “ v’Taher libeynu l’ovdecha  beh-Emet – Cleanse our hearts so that we might serve You in Truth.” Emet/Truth has the sense of  being attuned to what it is, and how it is, in reality.

Prior to the building of the Temple in Jerusalem we had a traveling Tabernacle that was built after  the Exodus from Egypt. The Bible tells us how it had to be built to very precise specifications. At  the end of the book of Exodus there is a description of how, when the Tabernacle was completed, the Divine Presence made Her entrance to reside there. Later when the Bible tells us about Balaam  the prophet. Sent to curse our people he could not help but say “How good are your tents O Jacob,  your dwelling place O Israel.” He saw the tribes encamped about the Tabernacle in the center, and all the tribes in harmony with that broadcast. What a remarkable vision that is – to see all the  nations on earth receiving that broadcast and living in harmony! It is such a vision that likes to  appear to us in our vision of the messianic era. The teaching we received about how the Tabernacle in the desert had to be prepared to receive  the indwelling also includes the final act of anointing the surfaces of the Tabernacle with sacred oil.  Rabbi Abraham Joshua Heschel, the Apter Rebbe, in his great work Ohev Yisrael points out that  the Tabernacle came to life as a result of that anointing. In addition the lighting of the sacred  candelabrum brought awareness to the sanctuary. You have here the image of the Tabernacle as  something organic, alive and aware of being the center from which the sacred broadcast issues.

When The Broadcast Is Denatured

It is quite easy to understand from our own lives and existence to what extent we have been  flooded with information and impressions from all kinds of sources. It requires a great deal of  stilling the mind in order to tune into the Divine broadcast. However, the media have usurped the  bandwidth of our consciousness, so that now only with great difficulty can we tune in to the  broadcast that wants us to live in harmony.

This is the preface to the story of Chanukah. When the people had come back from Babylon and  rebuilt the Temple, although it lacked some of the Sancta of the first Temple, it nevertheless was  able to broadcast the message: “the universe exists on three coordinates: on Torah, on Avodah and  on Gemilut Hasadim.” The Divine Name had settled in the Temple and the broadcast was  resumed.

A new culture, that of the Hellenists, was spreading over Asia Minor and the Fertile Crescent with  a broadcast that was inimical to the one that came from Jerusalem. They invaded the Temple, desecrated it, offered swine on its altar and thereby changed the broadcast. This proved allergic to  the soul of the Jewish People, who under the Maccabees took up the sword against the Hellenists,  and after fierce battles in which they experienced that God helped them, they freed the Temple  and purified it. Now they needed to light the sacred Menorah. In order to do this one needs  specially and meticulously prepared olive oil. Finally after much searching they found one little  cruse of oil still sealed with the seal of the High Priest that contained just enough to light the  Menorah for one day.

It takes seven days to make fresh oil. They didn’t want to wait until he had enough  oil for the continuous lighting. That would’ve meant a delay. They so craved to receive the sacred broadcast that they did not wait. When the oil in the Menorah  burned for eight days, until fresh oil could be produced, it was seen as a miracle.

The ritual and liturgy connected with Chanukah and the candles are there to cleanse the doors of  our perceptions so that we might again be attuned to the order of the miraculous. So we are taught  that “these candles and their light are sacred and we have no permission to make use of them. All  we must do is to just look at them”.

Gazing at the candles, as they are in themselves, is the meditative contemplation we are urged to  do on Chanukah.

While it is important to display the (Chanulah) menorah so that it could be seen from the street, the  purpose is that even the street may receive the benefit of Pirsuma d’Nissa, to be made aware of the  miraculous order.

Here, the High Holy Days serve as the source of the broadcast for the whole year. We lived our  spiritual life in the dimension of sacred time, in ‘illo tempore’ – ‘in that time.’ A new paradigm  shift occurred in our day after the Holocaust, Hiroshima, Nagasaki, the Moon-walk and Internet.  The Gaian crisis brings us into an Eon where things depend on the individual, the nefesh. At this  point the receiver of the broadcast is what is in our heart. In order to fine tune this receiver it is also  necessary to be in some connection and communion with individuals who are attuned to the sacred  broadcast.

The rules stated in the Talmud specify that all that is necessary is for each household to have one  candle at the door facing the street, located as follows: “the mezuzzah at the right and the  Chanukah candle at the left of the door and below 10 handbreadths.” The Talmud then tells us  further that there are people who are more meticulous and generous in their observance, “the  mehadrin,” and that they’ll have one candle per person of the household. Then the Talmud says  that those who are the meticulous-of-the-meticulous, the “mehadrin min ha-mehadrin,” the  generous of the generous, will each light one to eight candles following the teachings of Hillel, beginning with one the first night and going up to eight by adding another candle each night.  Shammai’s school opted for beginning with eight and going down to one reducing each night by  one candle. [In another area of difference of ruling Hillel says that light has many colors whereas  Shammai says that there is only one color to light. It has been my custom to use two electric menorahs one with colored light bulbs following the rule of Hillel and one with only white bulbs  following the rule of Shammai] on each (Chanukah) menorah.

To return to the main theme: Chanukah is all about Pirsuma d’Nissa, and being in touch with the  miraculous order. The place from which we can tune in to the miraculous order is by opening  ourselves to the imaginal realm, and to look at what is before us – the light of the Chanukah candles.

At the very time when we are in the darkest days of the year,

lighting the candles for Chanukah brings us back to the miraculous order.

This is what we need to invoke for ourselves and for the rest of the world at this time. May we be granted the vision of the good world that is to emerge from the present dark chaos.