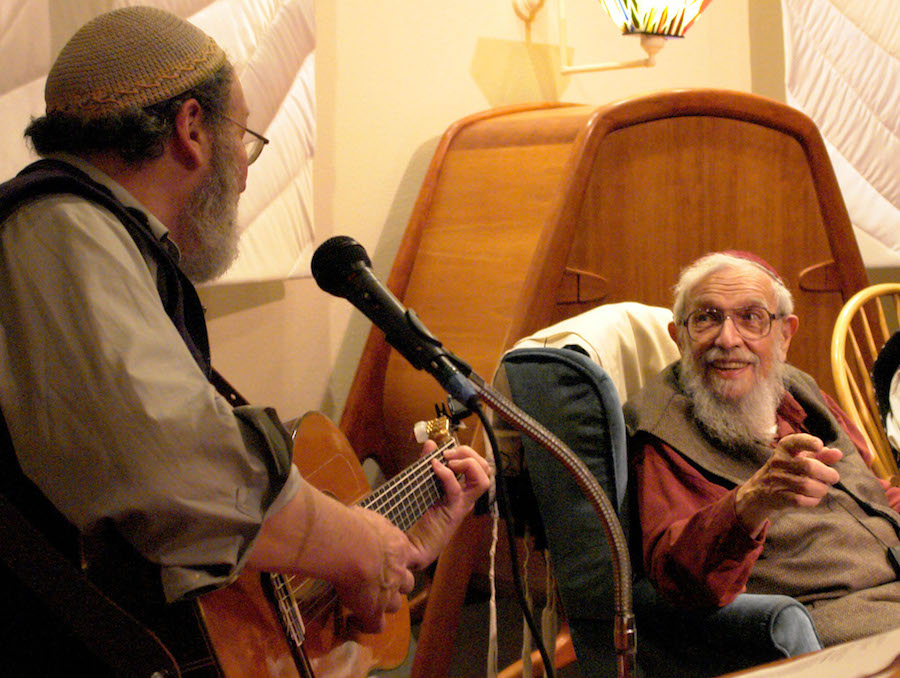 The Seder As a Template
by Rabbi David Zaslow

On Friday, December 30, 1994, I drove to Canterbury, a beautiful 48-acre Episcopal retreat center in Oviedo, Florida, to what promised to be a historic gathering between Jews and Christians led by Rabbi Zalman Schachter-Shalomi. It was just months before my rabbinic ordination, so I was especially eager to observe my mentor interacting with Christians in an intimate, weekend-long retreat. Reb Zalman was co-leading with Father Edward G. Zogby, who was vice president of Fordham University in New York City. The retreat was called “Dance around the Midnight Pole; Happy Birthday, Jesus”—a title typical of the wry humor and fearless innovation that Reb Zalman always brought to his work.

On the Eastern Orthodox, Catholic, Anglican, and Lutheran calendars, January 1 became a special holiday called the Feast of the Circumcision. Count eight days from December 25, the day Jesus’s birthday is celebrated, and you arrive at January 1, the date Christian tradition assigns to Jesus’s ritual circumcision (brit milah). The day we celebrate the secular New Year is actually a commemoration for Christians of Jesus’s first religious ritual as a Jew. Reb Zalman had proposed this Sabbath retreat many months before, planning to use the sacred technology of the Passover seder to enhance the celebration of the New Year at midnight on Saturday. He believed a commemoration of Jesus’s brit milah on New Year’s Eve would offset the secular tradition of a party based on merriment and drinking.

The plan was that on Saturday afternoon the Jews would teach the Christians the structure of the Passover seder: the four questions, the telling of the Exodus story, four glasses of wine, a festive meal, and lots of singing. In this retreat, though, the story told would be about the birth of Jesus, and how the Gospels helped change the world. The four questions would relate to Jesus’s life, and the four cups of wine and festive meal would be integrated into a formal Catholic Mass commemorating the body, heart, mind, and the spirit of Jesus indwelling in every Christian. The Mass itself would begin at midnight, followed by an all-night study, prayer, and meditation vigil in the manner of the Eastern Orthodox Church. The vigil would culminate with a traditional Jewish morning worship service at sunrise led by Reb Zalman.

There were approximately two hundred participants—Jews, Catholics, Episcopalians, and Methodists. After welcoming the Sabbath with traditional blessings over the candles, wine, and bread, Friday evening was spent chanting and singing songs from the Psalms in Hebrew, Latin, and English led by Reb Zalman and Father Zogby. It was magnificent. But after a long day of traveling we retired early knowing that the next day would be mysterious, long, and filled with surprises. We would not be disappointed.

After a morning service of Jewish prayers and Catholic chants, Reb Zalman read from the Torah portion that describes Moses’s intimate encounter with God at the burning bush. This was followed by deep teachings from Reb Zalman and Father Zogby on the Jewishness of Jesus and the birth of Christianity. We were then asked to take some time alone to contemplate how we might overlay the template of the Passover seder onto the story of Jesus’s birth in a way that was authentic and respectful of the key differences in each of our religions. We all sensed the historic nature of the weekend. This was clearly not just a meeting with brothers and sisters of another faith, but an unexpected encounter between ourselves and God.

When we gathered again in the afternoon it was time for the Jews to teach the Christians about the structure of the seder and how we blend rituals and symbols into the telling of the Exodus story. Then the Christians would collaborate with us on how to incorporate the story of Jesus into their own Haggadah (a booklet that tells the story) that would be read that night as part of the Midnight Mass. Of course, the sacred task of creating an authentic Christian seder took many hours. We had a light dinner together and retired to our own rooms for rest, knowing that our Midnight Mass with seder would last until sunrise.

When we came together at 11:30 pm it was with a sense of anticipation and awe. We knew that in the 2,000-year history of the church and the synagogue, no rabbi or priest had dared to create this kind of ceremony. This was not a hybrid or fusion, but rather a “new thing” like the prophets Isaiah and Jeremiah had spoken about, lending one religion’s template to the telling of another religion’s sacred story.

We started slowly, easing into the ritual with Hebrew songs from the Psalms, as we had the night before. At midnight Father Zogby, who by that time we were addressing affectionately as Father Ed, began leading the Mass. Our role as Jews was not to participate, but to be sacred witnesses to the ceremony of our Christian friends. At Reb Zalman’s request the Mass was chanted in Latin with line-by-line English translations.

In the name of the Father, the Son, and the Holy Spirit.
Christians: Amen.

The Mass continued with the doxology known as Gloria in excelsis Deo, a powerful ceremony of confession, and then we reached the canon.

Father Ed: Dominus vobiscum. May the Lord be with you.

We lift them up to the Lord.

Father Ed: Gratias agamus Domino Deo nostro. Let us give thanks to the Lord our God.

Christians: Dignum et iustum est. It is right to give thanks and praise.

Then Father Ed fell silent. He had been leading the service in Latin from memory with no missal (prayer book) in his hands. The silence grew until everyone knew something was wrong; the priest didn’t know what came next. There was a kind of collective bewilderment as we waited for him to recover. It occurred to me since he was now an administrative priest at Fordham, he wasn’t leading Mass on a daily, or even a weekly, basis. This could be a long pause.

The evening continued with the reading of the new Haggadah the Christians had created to tell their story. It was glorious and unforgettable, but what stood out most in all our minds was the miraculous instant when the rabbi sang out during the Mass to help his friend, the priest.

Later that night, I leaned over to Reb Zalman and asked, “How did you know what to say?” He explained that decades earlier he’d memorized large portions of the Mass in Latin as a tribute to his deep respect for Catholicism beginning in the 1950s and his personal friendship with Thomas Merton, with whom he used to take summer retreats at the Abbey of Gethsemani in Kentucky in the 1960s. With a twinkle in his eye he leaned in and whispered, “Baruch Hashem! Blessed is God! It sure came in handy tonight!” I laughed, feeling grateful again to have this courageous, once-in-a-generation rabbi as my teacher. The weekend ended with a sunrise service in Hebrew, and as we left on January 1, we said goodbye to each other with “Shana tova, Happy New Year.”

From Reimagining Exodus: A Story of Freedom by Rabbi David Zaslow. Copyright © 2017 by David Zaslow. Used by permission of Paraclete Press

A Lesson From the Garden
by David and Debra Zaslow

In the early spring of 2000 Rabbi Moredchai Twersky (Sh’lita), known as the Hornosteipler Rebbe, organized a Friday morning service in Boulder, Colorado at the Masonic Lodge. Reb Zalman, zt’l, invited me to tag along as his davvenen companion. During the early part of the service one of Rabbi Twersky’s students led the prayers as Reb Zalman and Rabbi Twersky stood next to each other off to the side. They peered intently out the window, pointing and chatting quietly back and forth as the whirring of a hedge trimmer could be heard outside.

Reb Zalman returned to his seat next to me a few minutes later and whispered, “Nu Duved leiben, so do you want to know what we were talking about?”

Naturally I said, “Of course!”

Reb Zalman said, “Rabbi Twersky was pointing to the gardener outside who was trimming the hedges. He turned to me and said ‘See, Zalman, when you trim too much the hedges don’t look so good.’”

I nodded, intrigued, as Zalman leaned in closer and continued.

“So, I pointed to the untrimmed hedges and said, ‘See Mordechai, when you never trim the hedges the plant gets all choked up in the overgrowth and can’t breathe.’

You know what I’m saying, Duved?”

All I could do was whisper, “Wow!”

Rabbi Twersky glanced over at us as Reb Zalman told me the story. He smiled at me from across the room, winked, and shrugged his shoulders as if to say, “Reb Zalman’s got a point!”

I’ll never forget the lesson I learned that morning from my rebbe, the gardener, Rabbi Twersky, and from the hedges themselves. If we trim too much from the shrub of Judaism loses its essence, but left untrimmed it chokes on the overgrowth. Our mindful pruning of ritual practices and prayers keeps our tradition healthy and alive, like a treasured and well cared-for plant. My colleague, Rabbi Simcha Daniel Burstyn, called this “a lesson from the garden.”