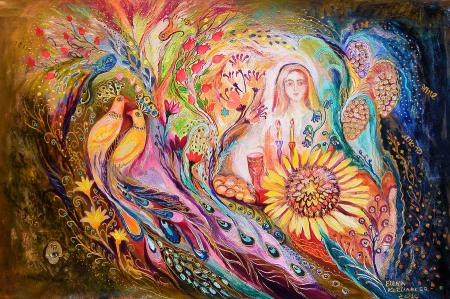 Truism: The name of God does not appear in the Book of Esther.

Truth: The names “Elohim” and “YHWH” do not appear.

We speak about God with many other words, too: Majesty, Presence, Infinity, Source – words important in Kabbalah. And we can find some of those words in the text of Esther. At first glance, they seem not to refer to God. Did the author of Esther hide Kabbalistic hints to God in the story’s language?

A simple “yes” would seem anachronistic. Esther was written in the 5th century BCE – 1500 years before Kabbalistic concepts took shape. However, as our sages say, eyn mukdam u’me’uchar baTorah – time does not exist in Torah. Empirically, earlier writings provide language and themes for later ones; later writings respond to earlier ones. Theologically, scripture expresses Divine speech, which is deeper than human speech. Divine speech carries multiple meanings and possibilities. These hide in stories, sentences, phrases, individual words and other units of meaning, waiting to be discovered.

What has been hiding in the text of Esther, waiting to be discovered?

Kabbalists teach that God Itself is infinite (eyn sof), unknowable, and hidden. God is revealed to us through spiritual qualities (sefirot), such as wisdom, love, beauty, endurance, majesty, presence, and other portals. Some teachers describe the qualities as livushim, garments of God: they enable God to go out in public, but hide the inner God.

Most popular of these spiritual qualities is Shechinah, experienced by many as God’s maternal presence, and known also by the name Malchut, majesty. Midrash teaches that Shechinah accompanied Jews through their exile in Babylonia, which later became Persia, Esther’s home. In the Book of Esther, Shechinah seems to be everywhere in the Persian royal court: the word malchut appears 17 times.

When Esther prepares to approach the King to save her people, va’tilbash malchut – she clothes herself in garments of majesty (5:1). Literally, she puts on her ceremonial Queen’s dress. Kabbalistically, she puts on the guise of Shechinah. Midrashically, she protects the exiled Jews. Metaphorically, she reveals God’s presence, from which no one is ever exiled.

After the Jews are saved, Mordehai enters the public square b’levush malchut – clothed in garments of majesty (8:15). The city is happy; the Jews are illuminated; many Persians convert to Judaism. Literally, Mordehai has been promoted to prime minister, dresses the part, and shows the power of his people. Kabbalistically, he too wears the guise of Shechinah, revealing her constant majestic presence. Spiritually, all who see are awakened and transformed.

Hidden and revealed. Hidden and revealed. This, says Kabbalah, is God’s dynamic nature. Linguistic patterns in Esther’s book lay bare the teaching. Eight times, significant adjectives are paired with the word malchut. These include keter (crown or portal), devar (revelatory word), kol (totality), levush (disguise). Through the portal of the open-ended word, Esther says, we can experience a total mystical union with God. Though the experience is temporary, it grants us a permanent vision: ability to recognize Eyn Sof behind all its disguises.

May the revelation of Shechinah this Purim transform you; may you know no exile this year.

Thanks to Pat Gill, Andrew Jordan, Motti Lis, Heidi Mannis, Wendy Rubin, Frank Segal, Jennie Virtue, and Leora Zalik at Or Shalom, who studied these ideas with me.